What Makes Being Black at a Predominantly White Institution Feel Odd?

DO NOT LET FEAR HOLD YOU BACK, SIS!

Own Yourself! – Finding Confidence in Who You Are 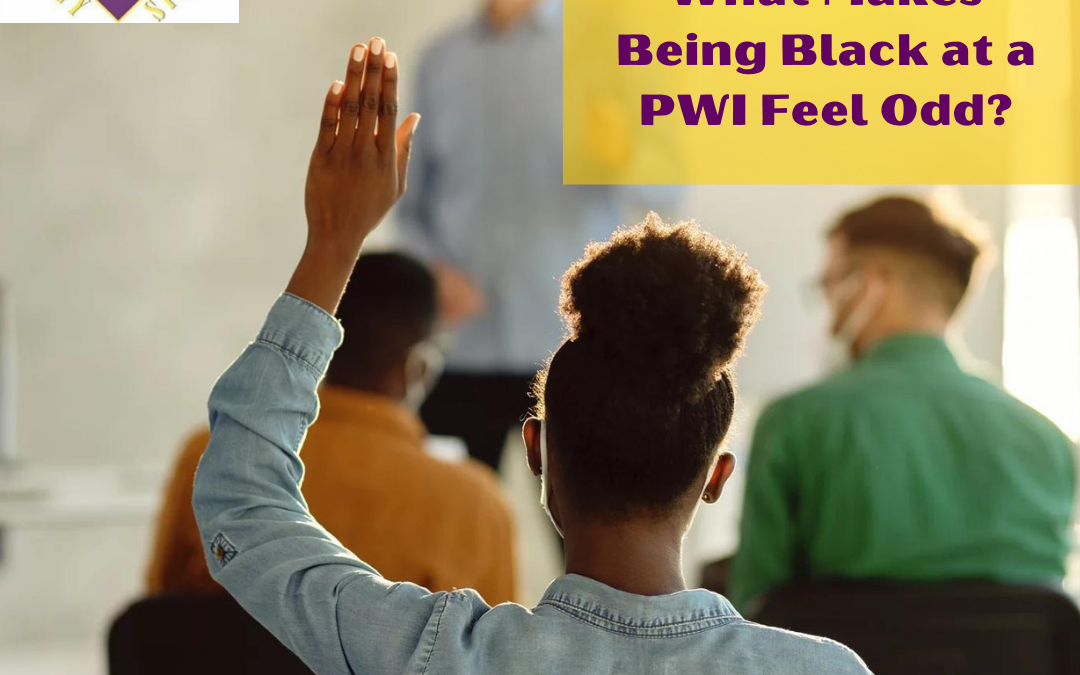 When I went to college, I knew that I would be in an environment with so many people from different places and backgrounds, but I did not think I would feel disconnected from my own culture and race. With the Black population being so low at my school, I feel a little isolated because I do not have much interaction with other Black students. We have a Black group chat, but that is not the same as seeing other Black students in class or across campus. I want to build connections with other students who have similar experiences of being Black at a PWI. Unfortunately, I do not have many opportunities to socialize with other Black students.

I love that my school has the Black Cultural Center with great opportunities. As a student, you can expand your artistic abilities with other Black students here on campus who can share in having many of the same experiences you have or had. It creates a safe environment for us to be ourselves and do what we love. I had the opportunity to be in the Black Cultural Center’s choir. I loved every minute I was in it and felt at home singing with other like-minded Black students on campus. During rehearsals, we had the opportunity to talk about how we felt as minorities on campus and how we got through hardships as minorities. It taught me a lot, and I highly recommend that other Black students who attend PWIs and feel isolated or disconnected from the rest of the campus community seek opportunities on your campuses to connect with creative groups.

As I stated earlier, it is hard for me to feel accepted. However, I love meeting other students from different places, backgrounds, and races. I have expanded my knowledge of different cultures, met many different people, and made many diverse friends! I would not trade this benefit for the world. Attending school with other people from diverse backgrounds allows the opportunity to step outside of your bubble that you may have remained trapped in by staying in your hometown, state, or even country.

I hope my school and other PWIs do a better job recruiting and focusing on the opportunity to bring more Black students on campus. When I was a high school student, my PWI that I ended up attending hosted diversity days, an opportunity to learn more about the campus through the eyes of minorities, but the PWI could have done better with marketing towards high school students.  I do not recall heavy marketing for this event. It would help if PWIs focused on outreach and marketing more for Black students. Every attempt to help create a better environment for Black students to develop connections with other students, especially Black students, will make a more welcoming campus.

What makes you feel strong as a Black woman at a PWI?

As a Black woman attending a PWI, my mother makes me feel strong. She previously attended the same PWI as me, so I reach out to her when I need guidance navigating a PWI with my identity and race. She has gone through a lot of the same things I have and will, and it is great to hear how she got through it to apply it to my own life.

Another person who inspires me to feel strong is my aunt, an African American who attended the same PWI. She had a lot of struggles trying to find her identity while being at a PWI, and she has helped me tremendously to try and find my identity. Without her, I do not know if I would have the strength to try and figure out how to exist as a Black woman at a predominantly white university.

Who inspires you as you reflect on Black History?

Sojourner Truth’s story inspires me to stand up for what I believe in and never give up.  She had every reason to give up and settle with what life had handed her, but she fought the good fight and gained her way into freedom.  Sojourner Truth was a former enslaved African American who advocated for abolition and civil and women’s rights in the nineteenth century.  She was born into slavery but escaped with her infant in 1826.  She then went to court in 1828 to recover her son and became the first black woman to win a case against a white man.  She advocated for rights when African American’s had none and were believed only to be 3/5ths of a human being.  She stood up even when everyone was against her and would not listen.  An important lesson that I learned from her story inspires me to always fight for what I believe in, even if everyone is against me.  It is better to fight for what I believe than become complicit to fit in with the masses.